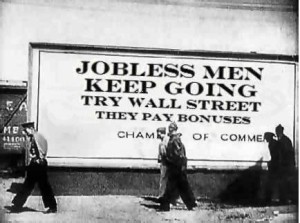 I graduated with my bachelors degree in finance about 7 years ago now.  I was lucky to find my first job just a month after graduation.  The metro Detroit area was already starting to show signs of an impending recession, and the company I started with was just emerging from bankruptcy.  This was a fortune 500 company, I was with them for nearly 3 years, and in that entire time they never made a dime in profit.  Eventually I tired of the repeated job cuts, wondering if I would be next, and I found a better opportunity at a Fortune 100 company in the area.  Money was better, advancement was more a possibility.  I worked here for a couple years, in which I worked many 16 hour days, and weekends to boot. Oh and to top it off, this company never made a dime in profit while I was there either…in fact, they were one of the companies to receive funding from the treasury.  Inevitably I tired of the continued doomsday culture, and the excruciatingly long hours, and I found myself at a much smaller company.  This company was a private consulting firm, very profitable and well known, and not publicly traded.  I thought for sure I had found my best opportunity yet, that is until 11 months later when I was called in to the CFO’s office and given my severance package.  Clients had dried up, and as it turns out, the improving economy was actually bad for our business…fewer clients were in need of turnaround and improvement!

Unemployment is high in many areas, and Michigan had made the headlines several times as being one of the worst places to find a job.  Yet I always thought I had nothing to worry about, after all, I had both a bachelors and an MBA, along with a plethora of finance and accounting experience.  Alas, none of that mattered, most of my team was let go and I was provided a 2 month severance package.  Not bad for an 11 month stint, but I had left a secure job less than a year prior, and had just bought a new home less than 2 months before they cut me.  A 2 month severance package would get eaten up at just that rate…2 months!  I always felt for those people who lost their homes because they couldn’t meet their mortgage payments, and had their cars reposessed, but I never thought I would be one of them.  I quite literally panicked, after all, I had known people laid off for nearly a year in my profession.

I took the first day to process everything that was happening, and I had the support of all my friends, and my girlfriend.  But that feeling of failure sinks in regardless.  You wonder about everything; paying bills, your career path, your future employment, and will this just happen to me again?  The next day I let the self pity go and got back into job finding mode.  I wasn’t going to take a two week vacation for soul searching or relaxation, instead I was determined to find that job within the two months until my severance was up.  I was dealing with 4 different recruiters, which I recommend first and foremost, since they will do most of the job searching and introductions for you.  I would then wake up around 8am every morning to search Indeed, which is a fantastic one-stop site for job search engines.  They pull in all positions from all the job sites like Careerbuilder, Monster, Hot Jobs, and even individual company sites, and allow you to search everything in their own platform. Lastly, I would search every fortune 1000 company within relative driving distance, visit their site and submit a resume to every potential position in my field.

My end result was nothing short of amazing.  I ended up having interviews with 5 different companies, and that resulted in 3 different offers.  I’ve been with my new company for the past 11 months now, and I couldn’t be happier.  In fact, I started with my company just as the severance was running out.  Yes, everything worked out just fine in the end, but I still haven’t forgotten that feeling I had last year, filled with anxiety and despair.  When things go bad, they go bad, sometimes there isn’t anything you can do.  You can’t necessarily avoid job loss, but you can mitigate the effect it has on you.  Make sure you build up your emergency fund, that your expense-to-income ratio is as low as you can handle, and mentally prepare yourself for the fact that ANYTHING can happen.  Even the ivy league degreed wallstreet investors weren’t untouchable during the financial meltdown.  I’ve since tried to better prepare myself financially for those types of emergencies, though it’s long slow road.  I’ve also lost a lot of that arrogance that I once had, and I experienced first hand that it can happen to me, and realize that it could happen to me again. Anything is possible!